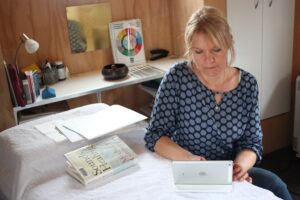 The way we respond to food varies for each person, just like our fingerprints.

An allergy is an inappropriate response by the body’s Immune system to a substance that is not normally harmful: the immune system identifies a non-toxic substance as an invader, antibodies are formed (for example IgE) that create the typical allergic responses such as congestion, wheezing, skin rashes etc…
Food intolerances can be defined as a sensitivity that does not involve the immune system but is caused by a reaction such as an enzyme deficiency that prevents that a food is properly digested and processed.
A true allergy to food is rare but even a tiny amount of the food can trigger a significant and sometimes serious reaction such as anaphylactic shock. The majority of adverse reactions to food are caused by food sensitivities/intolerances that can result in clinical symptoms but are not caused by a direct immune response as described above. Several types of foods can be involved, often accompanied by cravings. Food intolerances can lead eventually to an allergy if particles of undigested food enter the bloodstream and cause an immune response.
Truly holistic, kinesiology often shows, during a balance, that the prerequisite for many sensitivity related problems started months before when different factors (see below) caused the body to go out of balance.

What may cause allergies or intolerances?

All these aspects can be addressed with holistic health care.

What is the kinesiology advantage?
Elimination diets are time-consuming and hard to implement with children; often an allergen may still be missed if the response is delayed. Sophisticated blood tests are often expensive and cannot assist you in overcoming the inappropriate immune response or immune mismatch response (IMR). The skin prick test may pick up only a certain % of food allergies (IgE initiated) and may not detect food intolerances.
As a modality in energetic medicine, Kinesiology uses accurate muscle monitoring/testing and specific sensitivity ‘modes’ to work within the context of your current biological, energetic and metabolic state at the time of testing.
Because of the muscular system’s connection to the nervous system, the biofeedback obtained is amazingly sensitive – subtle distinctions could be identified that may not be revealed by a blood test. For example, the effect a food has on your digestive system could be different depending on whether the food has been processed or is in its natural form: I found clients who tested strong on raw milk but weak on pasteurized and skim milk.
The body identifies and indicates any weakening substance instantly through an unlocking muscle, no matter how muscularly strong the person may be. It is a totally non-invasive, gentle and quick process. Even babies and infants can be tested by using a parent as a ‘surrogate person’.